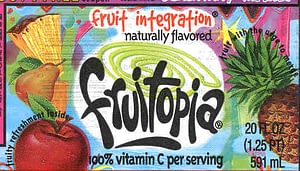 In keeping with the theme from our posts a few weeks ago, we’re going to take a stroll down drink vending machines memory lane. Let’s go back to 1994: a time when a pre-Monica Lewinsky Bill Clinton was in the Oval office, people everywhere were wearing unfortunate Doc Martins and a long sleeve flannel tied around their waist, and 1 out of 4 young people had their Walkman headsets blaring Pearl Jam. Oh, and they were probably lining up in front of drink vending machines to get their hands on some Fruitopia.

Ah, Fruitopia. The free-spirited, pseudo-hippy beverage marketed by one of the largest corporations in the world, Coca-Cola! According to the New York Times business reports, it was brought about as a push by Coca-Cola to compete with Snapple and other flavored tea drinks. The flavors of this new-wave beverage included, The Grape Beyond, Tangerine Wavelength, Citrus Excursion, Fruit Integration, Pink Lemonade Euphoria, Lemonade Love & Hope, Raspberry Psychic Lemonade, and Beachside Blast. Fruitopia was discontinued by Coca-Cola in 2001 and was replaced by the Minute Maid moniker. If you’re still jonesin’ for some Strawberry Passion Awareness, you can head over to McDonalds—they still have it in their fountains.