When you think of vending machines, the contents peering at you through the glass are likely to be snacks and soda. Whether you say soft drink, pop, or Coke, carbonated beverages are the heart and soul of drink vending machines. What is cool is that they used to be part of the social heart and soul of America, too, in the form of the soda fountain. 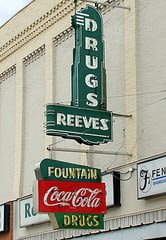 The soda fountain was an attempt to replicate mineral waters that bubbled up from the Earth. It began in Europe, but achieved its greatest success in the U.S. In their heyday, soda fountains flourished in pharmacies, ice cream parlors, candy stores, department stores, and train stations. They served an important function as a public space where neighbors could socialize and exchange community news. In 1950, Walgreens, one of the largest chains of American drug stores, introduced full self-service drug stores that triggered the decline of the soda fountain. Drive-in restaurants and roadside ice cream outlet competed for customers. North American retail stores switched to self-service soda vending machines selling pre-packaged soft drinks in cans. Sound familiar?

Today only a sprinkling of vintage soda fountains survive, and placing one in your school or office is probably impractical. But for the best in soda vending machines, come see us at USelectIt!