Soft drinks are just like every product; some of them succeed, while others fail. And despite the fact that Coca-Cola and Pepsi have been the two superpowers in the never-ending cola-wars, they too have created products that have crashed, burned, and vanished from drink vending machines everywhere. 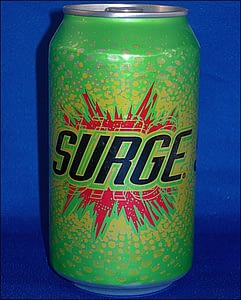 One of those disappearing products was Surge. Originally introduced in Norway under the name Urge, Surge was a citrus flavored soda product created by the Coca-Cola Company in an attempt to compete with Pepsi product Mountain Dew.

Urge was originally launched in 1996 in Europe as a test product before being brought to the United States a year later. The pop initially did remarkably well, but after a few years began to slip. In 2003, Coca-Cola quietly canceled Surge, discontinuing it in the United States, as well as Denmark, Norway, and Sweden.

Could Surge be making a comeback to  soda vending machines everywhere?? The Norwegian version was re-introduced on September 1st, 2008 in response to a massive Facebook campaign. Despite receiving little to no marketing, Urge holds 10% of the market share in Norway, and has begun to expand with a new energy drink (“Urge Intense”) and raspberry flavored version (“Red Sting”).

Additionally, surviving cans of Surge have become popular collector’s items in the United States, as reports indicate a 12-pack was recently sold on eBay for over $160.