When I was little, the snack vending machines in the clubhouse of the beach club to which we belong seemed magical. My brother and I were rarely allow to have candy or other treats, so getting something from one of the vending machines was an exciting event. 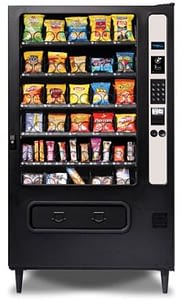 What kept it particularly enthralling was that the candy machines were so old that their ability to function was not guaranteed. The man who ran the beach had a specific, scientific technique; he would shake the machine and then kick it in a specific spot (he showed us where to aim). This proved to be the most effective method, but even then the vending machines would sometimes stubbornly refuse to part with their contents. By the time those vending machines were retired, they had probably been in that beach house for over a decade.

My brother and I are really happy that the beach now has those new vending machines; we may be older but we still consider getting anything from them a treat!